Congratulations to Muhtarim from Brazil Class who followed in the footsteps of his older brother by winning the Lucan East Chess Championship for 2014. The runner-up was Hari from Spain class. Ralph from China class finished in third place.

Their names appear on the School Champions Roll of Honour List on http://www.chessforall.net/

Well done to everyone who took part! 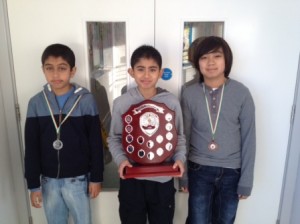