On Monday we went down to the hall to do some science with a guy called Mr.Z.We got into groups of four and built are own roller coasters!With Mr.Z we made lots of different types of roller coasters for the marbles to roll down!It was hard making them but it was still FUN!!!!!!We made loop the loop roller coasters and ones with big hills and last but not least we used cups to make an awesome cool one!!!On Tuesday we started FOOD DUDES!!!!We had to eat oranges and cucumbers on the first day,then apple slices and mangetout on Wednesday and on Thursday we had a bananas and sliced peppers.We got the first prize on Tuesday witch was a step counter!!!On Wednesday we got to do art inspired by Hundertwasser!!!!The whole class got to paint there own unique pictures!!We then named them all and put them outside on display. A while ago we started friends for life with Karen!on Thursday we all went down to the library and and talked about feelings.We acted out different types of feelings and learned lots!This Friday at assembly the Dublin football team came in to show us the trophy that they just won!!!They gave everyone a picture with the whole teams autograph!!Today we also figured out what we were doing for are winter play!The theme this year is the world around us.The  class decided that we were going to do some of our favourite poems that we have learnt in school this year!This week we started on some mini projects on hibernation with our partners.We had a choice from bats,frogs or hedgehogs.We found facts on the internet and put them in are projects.That is what Chile class done this week!!By: Nasma and Haniya. 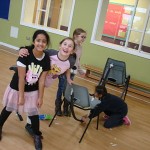 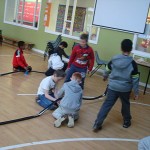 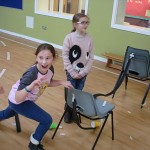 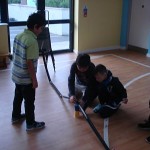