We played in a handball tournament on Monday 1st of December. First we went on the bus. When we went out of the bus we put our bags in the hall and we waited for our turn to begin. We were in the second match of the tournament.

We tried our hardest but the Gaelscoil eventually won. The score was 3-0. We were very happy with how we performed. Then we went home on the bus and sang songs to celebrate our achievement! 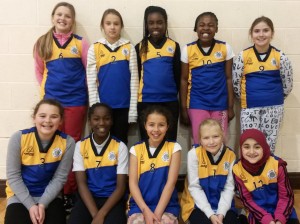