We walked down from our school to the hall where we met the other teams to shake hands before the match started.

Once we were in our school colours we talked tactics and decided on positions for each person.We got off to a good start when the boys won the first match.

The confidence began to build up as each match carried on. As we reached the final 2 matches the pressure was on, when they mixed the teams .

In the end it was a fantastic victory for our school as we had won for our second year in a row. Everyone was happy and relieved. It was a great end to a prefect day!

By Cheta and Lucy. 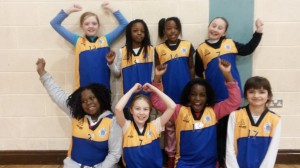