Cumann na mBunscol is a primary school hurling and football initiative, which enables boys and girls to take part in competitive GAA games. This week Lucan East ETNS had their first outing in the senior boys’ football against Gaelscoil na Camóige. It was a fantastic team performance and the boys represented the school with great pride. The match was played in a very sporting manner.

The boys’ team will have their second outing after school on Wednesday in Griffeen Valley Park. We would welcome any supporters who would like to come along to watch and support the team. Best of luck to the senior girls’ team who are also playing their first game on Wednesday afternoon. 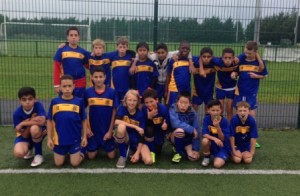