On the 13th Of May, our class, Brazil, went to Esker Educate Together to play monopoly with another 5th class. To get to the school, it took at least a 10 minute walk.

The school was similar to our school, but creative in it’s own way. After looking around, and giving ourselves a slight tour, we went to the 5th class that we were going to play monopoly with They were called Class Red.

By the time we got there, all the monopoly games were set up, and they were waiting for our arrival. We got into our separate groups, and introduced ourselves. Class Red were extremely friendly, and welcoming.

We then began our game of monopoly. Class Red were really good at the game. We gave out the jobs, and a girl in Class Red said she wanted to be the banker, and that was decided.

We played in different groups, not individually. We were in partners. Class Red were in pairs, and so were we. We really enjoyed playing with them. Getting to know another class that we were possibly going to secondary school with was a great experience and so much fun. We wish to do so another day. 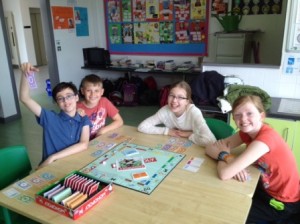 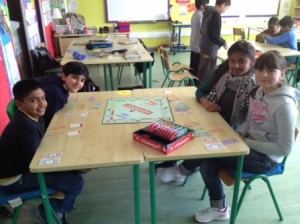