This week in Romania class the boys went to a handball tournament.They went straight after small break.The boys went on a double decker bus.While they were in the bus going to Leixlip they were talking about the tournament. Simon and Eva were with the boys.When they went to the Confey GAA club they started doing their warm up.They played 4 matches.The boys came in 3rd place and had a great performance. On Wednesday they went to a GAA match against Griffeen. They lost but again did  a great performance.In class this week we learned learnt about ears. The ear is made of the outer ear, middle ear and the inner ear. The smallest bone in the body is in your ear. The bones in your ear are called the hammer, stirrup and the anvil. 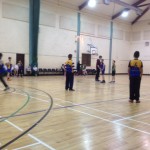