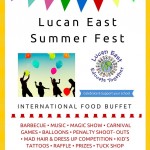 The Lucan East Summer Fest is fast approaching. The PTA are busy preparing and organising for the event which will take place on Saturday 11th June from 12 to 3pm. There will be a Barbeque, magic show, carnival games, penalty shoot-outs, dress up competition, raffles, prizes, a tuck shop and more. All the children in Lucan East are very excited about the event which promises to be a fun day out for all the family and the community.

The Summer Fest colouring competition was a big hit and there was so many fabulous entries. The winners will be announced next Tuesday 7th June and the prize is a golden ticket which can be used for different activities at the fest. There is also a jar in the hall where you can guess the number of lollies. The nearest guess will win the jar and its contents. It’s free to enter and the winner will be announced at the Fest. 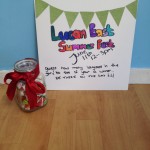