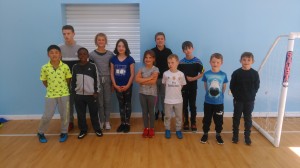 Our Active school committee was set up in September 2017. Each class had a vote to pick their class representative and here is a picture of the committee. We contacted local sports groups and the HSE health promotions officer to inform them we were undertaking the process of renewing our flag. The roles of the committee were discussed  in detail and various responsibilities were given out such as:

Our most popular are Lucan United, Irish Dancing and Ballyowen Celtic

Pupils who take part in physical activity and their achievements are recognised in our school. Teams often speak in assembly about their achievements; pupils visit classrooms showing their silverware and speak about their achievements. We created an achievement board in the hall where children bring in a picture and a note outlining their sporting achievements.  Notes from our local GAA club Lucan Sarsfields were given out to all children and a notice is our front door explaining when training takes place. Various sports coaches have visited the school over the course of the year. Here is a list of some of these that took place 2017/18

This month a number of teachers brought students to Croke park to watch our county Dublin play in the All Ireland ladies final against Mayo. The girls all had a great day and little did they know that many of them would be back playing in Croke park just a few weeks later. They reached the final of the Cumann na mBunscoil senior girls final. All the school in partnership with the parents took part in a sponsored walk to raise funds for PE equipment.

Two coaches from Leinster Rugby came into the school this month to provide some coaching sessions to children in first and second class. They provided some information about camps for the children over the Halloween break and a number of children attended these camps.

This month the boys and girls from fifth and sixth class attended a soccer blitz organised by the FAI. Clearly the work our FAI coach Stephen Rice had completed paid off as the girls qualified for the county final.

David Gilleck, former Olmypic athlete, and Gerry(coach from Lucan Harriors) visited the school this month to celebreate the conclusion of our marathon challenge. This was an event organised by Marathon Challenge Ireland and we worked with Lucan Harriers(local athletics club) to run this event. The support provided by South Dublin County council was also invaluable.

Stephen Rice from the FAI ran the Soccer Sisters camp with the girls in 4th/5th to encourage them to take up sports.

This month Gerry from Lucan Harriors attended the school to work on various athletic events with children from third to sixth class. Many children got involved with the club after enjoying the training. The cross county events, organised by Alision Casserly from South Dublin Co. Council, also started this month.

Fifth class started a eight week cycling programmed this month with Cycling Ireland. This was a brilliant activity for the children and really improved their confidence on the bike.

Active Schools week took place this month and we had coaches from Lucan Harriors, Zumba Ireland and Lucan Sarsfields in during the week working with different classes.

The children from 3rd to 6th who qualified took part in the Santry sports organised by Cumann na mBunscol. Every class attended a skipping workshop with Skippy John from Skipping For Life.

The children from 4th/5th class took part in a basketball blitz with Esker ETNS and Adamstown Castle ETNS. All children took part in the Sports Day that involved the children doing a station for 15 minutes. Each group did 5 stations. These stations were run by a mixture of parents and past pupils.

Useful Links of clubs nearby: